How to Regain Your Zeal

Some Christians just lose their zeal as time goes by. Maybe this has even been your experience. There are undoubtedly several reasons or causes of this, and I am not even sure I know all of them. I also suspect that for most people who experience a loss of zeal that the cause of their problem is not a simple one, but instead a complex one. That is, my guess is that for people who lose their zeal for the Lord and for His church, there are multiple causes acting together to create a kind of “perfect storm” for that’s person’s faith. 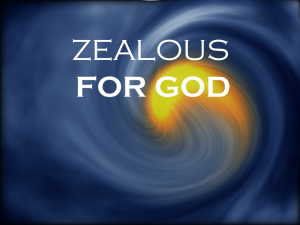 With that said, here are, I think, probably some of the factors that commonly go into a person losing their zeal:

1. Discouragement when things do not go as one had planned or hoped, especially when it comes to what we planned or hoped to do in our work for the Lord. This was Elijah’s problem in 1 Kings 19. He had just won a great victory for God in the contest on Mt. Carmel, but instead of being hailed as a hero and welcomed by the people of Israel, Jezebel sought to kill him. Discouraged, Elijah fled the country and seems to have decided that he could not go on any more. This was also Jonah’s problem. He did not want to preach repentance to the people of Nineveh, because he did not want those people even to have a remote chance of being spared from God’s destruction. Jonah wanted God to destroy the Ninevites. When that great city repented, Jonah was upset. He went out and sat himself under a vine and pouted, angry that God’s way was not Jonah’s way.

2. We allow themselves to become minimal Christians, or “church Christians,” and by that I mean we tend to equate our Christianity primarily (or completely?) with “going to church.” Of course, if this is all that Christianity is to you, it is going to get routine, dull, and boring pretty quickly. You are going to want “more,” but you then will realize that what we do together as a church is limited by the teaching and examples of the New Testament, so it is not going to change. Such people often complain about how routine or boring the worship services are, and they often find themselves withdrawing more and more from the church as time goes by.

3. Very similar to the previous point, a failure to grow in God’s word and to continue to grow (mature) spiritually often leads to a loss of zeal. What happens is that a person, for one reason or another, simply ceases to take in any more of God’s word. Maybe a person learns just enough to think that s/he has reached a pinnacle of spiritual maturity and they have little else to learn, no more growing to do, or maybe a Christian never learns any more than the fundamental teachings of the New Testament, perhaps because s/he thinks that there is nothing more to Christianity than these basics. The effect is the same either way. When a person stops increasing in their knowledge of God’s word, they become spiritually stagnant and their zeal declines.

4. The experience of having tried hard but not having seen very much tangible results for one’s work for the Lord causes some people to lose their zeal for that work and to cut back on their work for the Lord. Maybe it has been the work of teaching, or the work of service to others, or the work of trying to encourage other Christians. If a person works long and hard and sees very little reward for their efforts, it is probably only natural to want to give up and let someone else do the frustrating work.

I could probably go on, and no doubt you can think of other factors involved in the loss of zeal as well. But you get my point.

Now we can all agree (can’t we?) that none of these are legitimate reasons for losing our zeal. I don’t think any of them will “fly” with God or with our Lord Jesus, before whom we are all going to stand in judgment one day. But that is another lesson.

If you have lost your zeal – however it may have happened – how do you get it back? The answer is simple: you get it back in the very same way you got it in the first place.

Where did your zeal originally come from? It came from the gospel. When you first learned that the love of God has provided an escape from the consequences of your sin, that God would forgive you and that you could avoid His wrath – that message of love created in you a love for the Lord in return. “In this is love, not that we loved God, but that He loved us and sent His Son to be the propitiation for our sins” (1 John 4.10). It prompted in you a response of gratitude. “The kindness of God leads you to repentance” (Romans 2.4). Furthermore, when you first learned the gospel you learned that the way God has provided this wonderful forgiveness to us is by the sacrifice of His only Son, Jesus. He was the Son of God on earth, but God sent Him to those who would kill Him in order that He might be the sacrifice for our sins. That the Son of God came here, to this earth to help us, and that He died for us – the realization of this great truth also creates within us a response of love, joy, gratitude, and awe, which is collectively called “zeal.” 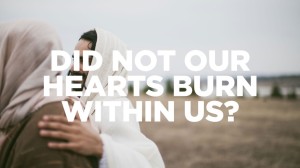 After Jesus was raised from the dead, you will recall that He joined with two disciples who were walking to Emmaus. They did not recognize Him, and Jesus asked them what they were talking about. In response, they told Jesus the story of Jesus (!), but it was clear that they had failed to see what it was truly about. They knew the story, but in another sense they did not know it. Their imperfect understanding had brought them to disappointment. So Jesus then explained to them “the things concerning Himself in all the Scripture” (Luke 24.27). Later that day these two disciples reported their conversation to the 11 remaining apostles, and they said “Were not our hearts burning within us while He was speaking to us on the road, while He was explaining the Scriptures to us?” (v 32). It was the gospel — the story of the death and triumphant resurrection of Jesus in fulfillment of the promises of God — that had set their hearts on fire. So if your zeal has waned, you need to go back to the gospel and remind yourself of just what it says, and what it has done for you, and how it has happened, and maybe learn it a little better. If you want to rekindle the fire, you have to go back to the original flame that set your soul on fire in the first place.   David McClister mcclisterd@floridacollege.edu

David McClister lives in Temple Terrace, FL. He married Lisa in 1980 and they have four children: Melissa (Temple Terrace, FL), Matthew (Merritt Island, FL), Meghan (Dickey; Bowling Green, KY), and Michelle (Dallas, TX) as well as three grandchildren. David was born in a south suburb of Chicago, IL and has worked with churches in Illinois, Indiana, Kansas, and Florida. He received an A.A. from Florida College in 1980, a B.A. in Classical Civilization from Loyola University of Chicago in 1983, an M.A. in Biblical Studies from Loyola University of Chicago in 1987, and a Ph.D. in Classical Civilization from the University of Florida in 2008 (Go Gators!). In addition to regular preaching (mostly at the Palmetto Church of Christ in Palmetto, FL), since 1996 David has been teaching at Florida College in the Department of Biblical Studies. He does not play golf, but he rides his motorcycle at every chance he gets. He believes that the Bible needs to be understood first in its original context, but also that the Scriptures are God’s unchanging word to man and fully relevant to our lives today.
All Posts