“No Divisions Among You” – Textual Tuesday

“Now I plead with you, brethren, by the name of our Lord Jesus Christ, that you all speak the same thing, and that there be no divisions among you, but that you be perfectly joined together in the same mind and in the same judgment.” (1 Cor.1.10 – NKJV)

Discipleship in many ways is a fiercely individual undertaking. It demands some degree of independence to stand up and stand out in a selfish and sinful world. But that same determination to serve the Lord also brings us into a relationship with others who want to serve the Lord. And we come to find that this bunch of disciples can include very different people – as Paul notes in Gal.3.28, “Jew, Greek, slave, free, male, female”. Moreover, those distinctions can include a host of moral backgrounds, as noted in 1 Cor.6.9f – “fornicators, idolaters, adulterers, homosexuals, sodomites, thieves, covetous, drunkards, revilers, extortioners…and such were some of you.” Fellowship in Christ can be uncomfortable, and unity in a local church can be a demanding and difficult enterprise. A local congregation brings together so many personalities, backgrounds, mindsets, tendencies, weaknesses, perspectives, etc. that forging “oneness” is truly remarkable. Such seems to be Paul’s point in Eph.3.10 when he notes that “the manifold wisdom of God might be made known by the church...”. It is a mark of God’s divine power and sapience that men are not only changed by the gospel, but unified in such.

1 Cor.1:10 is often used in a very broad sense to argue against everything from denominationalism to institutionalism to dozens of other “isms” that have divided believers in Christ through the ages. I am not denying that the principles of this passage apply to such matters. But, contextually, this passage seems to me to be a bit more limited in scope than we might appreciate. Please consider some specific observations and applications.

The letter in general is addressed to “the church of God which is at Corinth” thus Paul is appealing to folks who are already united in their common faith and objective and who are to be working together as a “local church.”

However, in this congregation, there are numerous problems that threaten the unity of the group. Paul has been informed that there already exist “contentions” (quarrels/factions) among them, and he is clearly concerned that the simmering issues not result in full-blown division. Thus he begins the instructive part of the entire Corinthian letter with this exhortation. It includes a three-fold entreaty – he “pleads” (literally “to call near”, then to “appeal; implore; beseech”) with them; he reminds them that they are family (“brethren”); he notes the authority of God behind his words (“by the name of our Lord Jesus Christ”). There can be no question as to the import of this issue.

His desire for them is “that you all speak the same thing.” Most of the newer translations take this phrase as idiomatic for general agreement, and the phrase is rendered such. I find the literal phrase telling, given first of all that they were divided in loyalty to different teachers (v.12f) and that this loyalty appears to have some connection to oration, rhetoric, or presentation. Paul will spend almost all of the first four chapters decrying things like “the wisdom of words”, “the wisdom of the world”, or “persuasive words”. It appears that the Corinthians were much given to favoritism and that their preference for one teacher over another was dividing them. Too many times disciples decry others over such matters as personality and presentation, rallying around this man or that. True agreement is not found in devotion to the messenger, but in adherence to the message. Thus Paul adds, “that there be no divisions among you.” A local church is not to be characterized by partisanship, favoritism, alienation, or internal strife. This group was as yet undivided in regard to worship and work. But the process of division was already infecting them, and Paul condemns such. A local church is to be united, and unity must be a continual goal for everyone in the group.

In accomplishing such unity, Paul calls upon them, and us, to “be perfectly joined together in the 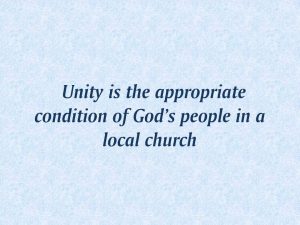 same mind and in the same judgment.” “Perfectly joined together” is another idiom which has been condensed into its fundamental meaning by most of the newer translations, which read something like “that you be united” (ESV). There is, however, something lost in such, for the idea behind the phrase is that of “repairing; mending; restoring.” It is used of mending nets in Mt.4.21, and in Lk.6.10 it describes the restoration when Jesus heals the man with the withered hand. Again, in Gal.6.1 the phrase notes the restoring of one who has been overtaken in a trespass. The concept is that of returning something to its rightful condition. Unity is the appropriate condition of God’s people in a local church, and something that is achieved by everyone’s commitment to “the same mind and the same judgment”. This calls us to oneness in standard, in knowledge, in discernment, in opinion, in application. And here is where unity gets hard. We often pride ourselves in our independence of thinking and conviction. Americans in particular are repelled by the idea that we are mere sheep who are being led about by another. Yet God calls us to oneness, even in the way we think, what we know, and how we apply such.

What I find the most fascinating about this admonition is the continual observation in the New Testament that Christians can and will have different understandings, levels of maturity, and even convictions regarding various issues. Obviously, the Jewish background of many in the first century prompted difficulties in local churches (Romans; Galatians). And confusion among those who left idolatry called for instruction both regarding idolatrous practices and issues of personal conviction about such things as eating meat sacrificed to idols (1 Cor.8-9f). The entire Corinthian letter is written to bring correction and understanding to people who were divided or dividing. All of which raises this fundamental question: Can we be united/unified and still have differences, whether of maturity, understanding, or even personal conviction? The answer is a resounding, “Yes”. In fact, such unity is commanded within a local congregation.

As to the “how” of such oneness, this is the point of 1 Cor.1.10. In order for such unity to be achieved, any and every disciple must offer himself completely and without reservation to the pursuit of the will 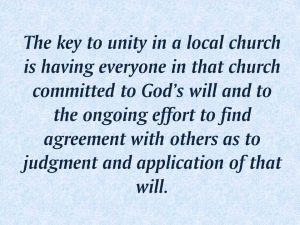 of God as seen in His revelation. And then we must all adopt the mentality that seeks to come to consensus and agreement upon that Word. Such determination stands opposed to the stubborn and often arrogant mindset that looks only to my opinions, judgments, and preferences, even when such obstinacy results in disdain, discouragement, and division. The key to unity in a local church is having everyone in that church committed to God’s will and to the ongoing effort to find agreement with others as to judgment and application of that will. Such requires continual work; repeated examination, study, and discussion; and a pervasive humility which drives us to commonality. God help us to be about the business of “mending.” 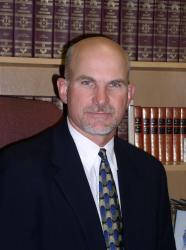 Russ and his wife, Tracy, live in Lumberton, Texas and have three daughters - Haley, Tori, and Emily. Russ received degrees from Florida College (AA 1982; Bible Certificate 1983) and the University of Houston (BA 1985 in Speech Communication). He has been preaching for over thirty-five years, and has been working with the Northwest church in Beaumont, TX for the past twenty-seven years. He has also taught in India and the Czech Republic, has contributed to numerous journals, papers, and books, and published a bi-weekly bulletin for thirty years. He loves to hunt, fish, and play golf, but his true passion is found in his family and his Lord. He is a proponent of a careful and thoughtful consideration of the text, with a view toward practical application in the life of the disciple.
All Posts