In my office I have pictures of my wife, my kids, my grandkids, mom, dad and my sisters. My dad has as his screen saver a picture of his mom and dad. I also have pictures of others who mean the world to me. Why do we have pictures? We love to look at those we love. We love to be reminded of them. We love to reflect on the joys of having them in our lives. They put smiles on our faces. They remind us of our better selves. There is another picture I would love to have. I would love to have a picture of Jesus. I mean a real live, original, genuine painting of Him. Not some figment of man’s imagination. A real picture of Him. Well, though we may not have that physical image of Him upon which we can reflect and cherish, we do have a picture of Him provided by the Holy Spirit. This picture does not give us a physical description of Him. Greater, it tells us who He is.

The Psalmist gives us different pictures of Jesus. Psalms 110 is one of those Psalms that helps us see Who He is. Just who is this Jesus? That was the question in His day and the question in our day. David tells us that, Jesus is the King, the Priest, and the Judge of all the earth.

This particular Psalm is prophetic and Messianic. It speaks of David’s Lord and was written 1,000 years before Christ. It only contains seven verses, and yet they are packed.  Psalm 110 is the Old Testament passage most frequently quoted in the New Testament. The Holy Spirit, who inspired the New Testament writers, thought this Psalm to be that important! 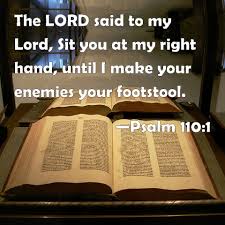 First, Jesus is King. He is Lord and sits at the right hand (vs. 1-3). This refers to the position of Christ after His resurrection and ascension into heaven. Forty days after His resurrection, Jesus ascended into heaven where He was seated at the right hand of the Father, far above all rule and authority (Eph. 1:20-22). As a proof (to Israel) of His exaltation, He sent the Holy Spirit upon the disciples on the Day of Pentecost (Acts 2:32-36). His ascension into heaven and the promised outpouring of the Holy Spirit was positive proof that God had made “this Jesus whom [they] crucified” both Lord and Christ” (Acts 2:36).  The one sitting at the right indicates authority or rule. Jesus the Messiah is risen and ascended, Lord over all at the right hand of the Father. 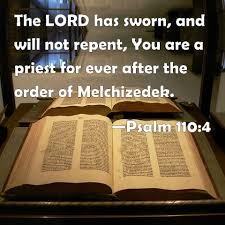 Second, He is Priest (v. 4). When the Lord God says something, it’s important. When He swears something, it is doubly important. When Scripture adds, “and will not change His mind,” we need to sit up and take notice! What is it that God wants us to see? That He has declared His Messiah to be “a priest forever according to the order of Melchizedek” (v. 4). What does this mean? All Levitical priest served limited terms of office, but Melchizedek had “neither beginning of days nor end of life.”  When did his priesthood begin?  No history, don’t know.  What happened to his priesthood?  There was no record.  What we have is Melchizedek isolated in history.  He didn’t get his priesthood from his father and he didn’t give it to his son.  So, his priesthood is without predecessor and without successor.  Therefore, Melchizedek was “like the Son of God, remains a priest continually.”  Melchizedek’s priesthood foreshadowed Christ’s eternal priesthood.  Christ’s priesthood is unending.  He passes it on to no other, but because He does not die neither does His priesthood. The Messiah, Jesus, is not just a human priest. He is God in human flesh, the only way that sinful people can draw near to God. To think correctly about Christ, we must understand that He is a divine, eternal priest between God and man after the order of Melchizedek. God has sworn it and won’t change His mind about it. It’s that important, so don’t miss it! 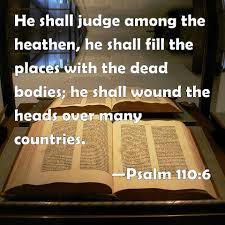 Third, he is Judge (vs. 5-7). The scene shifts from God’s throne to the battlefield. Assuming verse 5 is still addressing Messiah (which makes the most sense), the fact that God is now on Messiah’s right hand (instead of the reverse as in v. 1) simply is a Hebrew way of saying that God is Messiah’s strength in the battle against His enemies. The judgment of the Lord will be complete—it will include everybody.  The judgment of Jesus is going to be just and thorough.  It’s not going to be done half way. 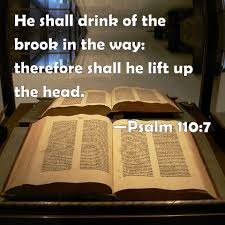 Fourth, He is victorious (vs. 7). The Son, who is the reigning King and eternal Priest, celebrates His victory.  In poetic picture “He will drink from a brook beside the way.”  The battle won.  Rest and refreshment are His.  In victory He lifts up his head.  He is triumphant.

Here is the take away. This is meant to lift us up. This should encourage us. We have a King, High Priest and Judge who is victorious. That is our Jesus. That is our Lord. So, when we read passages that say, “Do not fear” this is why. Our Lord reigns victoriously! We too will be victorious! He has made us more than conquerors! 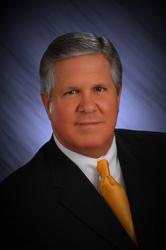 Rickie has been preaching full-time for 38 years. He has been working with the Campbell Road church in Garland for 26 years. For the past twelve years Rickie has served as one of the elders for the Campbell Road congregation. Also, for the past four years Rickie has served as one of on-line editors of Focus Magazine. He married his high school sweetheart, Jody. They have been married 42 years. Rickie and Jody have two children, a son and a daughter who have blessed them with eight grandchildren.
All Posts